(I'm just so freakin' fed up with Flickr, so I'm just gonna upload the pics directly from my computer, (which I don't like because it's not really feeling well.)) 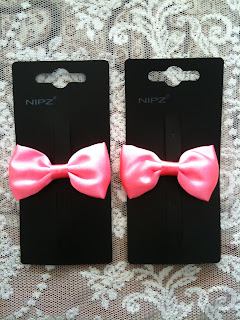 First, recently I've become OBSESSED with pink. It's insane! I've always been a bit anti pink, but I don't know.... They are so cute and easy to wear with the little beak clips. 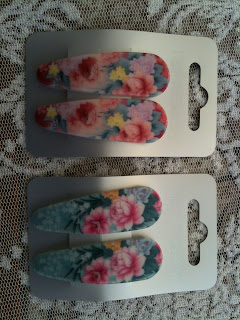 Next I found these super cheap floral hair clips. I'm still growing out my bangs and I've been looking for ways to style the new length, and these are just too cute imo. 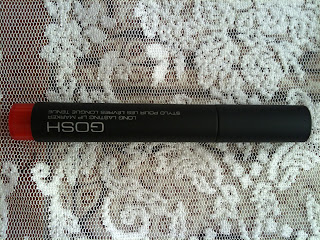 I've been thinking a lot about buying this GOSH lip marker (lip stain) in 001 red, because I have it in 003 berry and I LOVE that one. 003 is the perfect berry red colour and it's a product I have repurchased. BUT... I'm not impressed with the 001 red, at all. It looks very orangey on and it's the first time ever that I've had a make up colour that doesn't suit me. (My skin tone is very neutral, so I can wear pretty much any colour.) Also, after I remove what I can it leaves my lips a neon pink, which I don't really like. I guess I'll use it under my red lipstick as a base. (In DK you can't return it.) 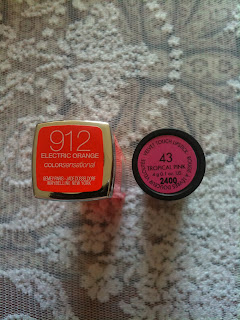 I also bought two lipsticks! A sheer, but bright, orange from Maybelline called 912 Electric Orange. The texture is almost like a gloss, but you can build up the colour as you can see in the swatch below. The pink lipstick is from GOSH and is called 43 Tropical Pink. It's very shimmery and it smells sooo goooood. :) It looks very fresh and cute. The baby pink is a big contrast to my general style which I really like. The red swatch is the GOSH 001 red and it looks very nice in bright sunlight on my hand, but on my lips it just looks very meeh.... 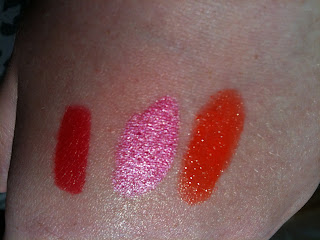 The 'colorama' nail polishes was so, so cheap I couldn't help myself. I think they are a dupe for some other line, but of course I can't remeber now. T____T' The one to the far right is yet another sign of my obsession... A beautiful light pink nail polish from GOSH which is my favorite brand when it comes to nail polishes. It's called 598 Bubble Gum and it looks a bit darker dry. I love it! 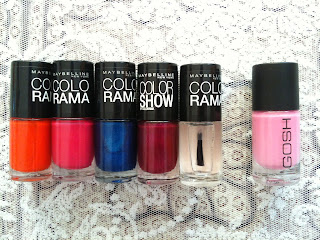 The favorite of the Maybelline colorama is this gorgeous blue-ish berry colour with a blue-purple shine effect. On the nails it looks excactly like it does in the picture. :) So pretty! 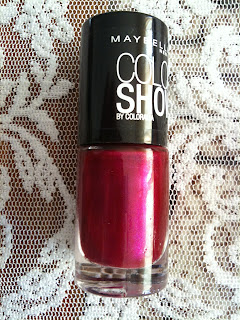 Okay, sooo..... I've always been lovin' the loafer trend, but I'm very picky and a 'bit' cheap. If you mix that with the fact that it's nearly impossible to get anything here in Denmark, yeah.... Anyways, I had been looking at these several times and then they came on sale for 50% off, and they were'nt even expensive to begin with, I HAD to have them. I'm such a sucker for a good deal! I think they are nice as an everyday summer shoe. :D 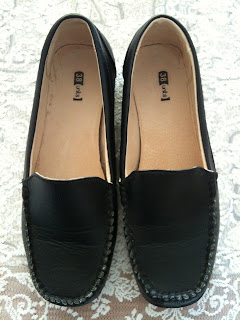 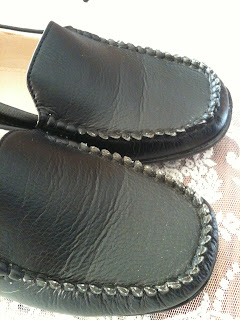 Besides my pink obsession I'm also quite fond of mint green for the time being. I'd been driving by this in my motorised wheel chair so many times and just sighing after this! And of course it got on sale and I got it for almost nothing!(And it says 'ART' on it!) :D When I got home I cropped it to make it more flattering. Even though I'm quite round my waist and ribs are one of the most lean parts of my body, and I always wear high waisted maxi skirts so it looks very flattering on me I think. :) And showing that part of your belly is apparently a big thing now! 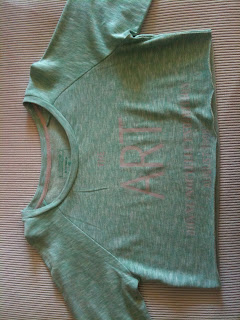 When I saw this GOSH nail polish I just about died!!! It looks so pretty and I think it goes so well with the ART shirt. ^___^ I have to say though, it looks nothing like that dry on the nails, unfortunately... But  I still like it. It looks like a shimmery, blue-ish, minty green. (It looks like the minty green part you can see on the bottle.) 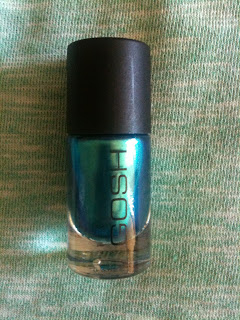