Sooo... I bought this product a few months ago. I had been trying honey lightening my hair for quite some time, with zero results, so I thought it was time to turn to peroxide... I haven't been using it a ton, but I have used it enough for there to be some kind of visible result... I see no difference at all. And my hair hasn't been the least dry or angry, so I don't know... And I have both tried following the instructions and not. It just doesn't really have any effect. I know it says it's for blonds only but I like the brassiness. I refuse to believe that it works on blond hair... Or any hair. :S 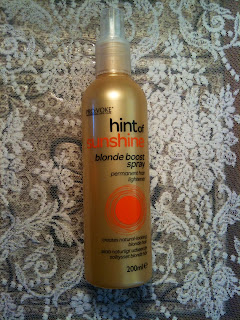 So, I don't know if I'll finish this product or not. But later today I'm gonna turn to the big peroxide guns and do some highlights and blonder pieces here and there!!! I feel great excitement! I'm not too concerned with the potential damage, my hair can take it. It's actually pretty resilient. :)

UPDATE: I still don't like it and I wouldn't recommend it to anyone. :(